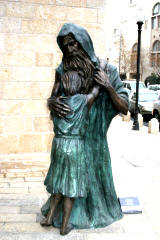 “The Prodigal Son” Sculpture by Sam Philipe of Israel

Christian Themed Gift for a Museum in India

PTWF organized this Christian themed sculpture to the Revi Karuna Karan Memorial Museum  in Alleppey, India. An Israeli Jewish sculptor created a Christian monument to be exhibited in India.

Pave the Way Foundation has initiated a magnificent gift of a monument of the Prodigal Son to be donated to the Revi Kauna Karan Memorial Museum in Alleppey India. 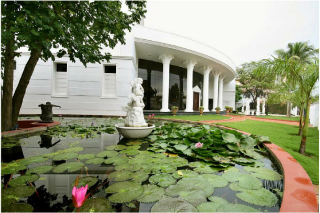 This is a magnificent 1,400 pound, 7 foot bronze monument built in Israel by famed Israeli Sculptor Sam Philipe featuring a Christian theme and placed in a Museum in a Hindu nation.

The story of the Prodigal Son, also known as the Parable of the Lost Son, follows the parables of the Lost Sheep and the Lost Coin. Jesus is responding to the Pharisees’ complaint: “This man welcomes sinners and eats with them.”

Jesus tells the story of a man who has two sons. The younger son asks his father to give him his portion of the family estate as an early inheritance. Once received, the son promptly sets off on a long journey to a distant land and begins to waste his fortune on wild living. When the money runs out, a severe famine hits the country and the son finds himself in dire circumstances. He takes a job feeding pigs. He is so destitute that he even longs to eat the food assigned to the pigs.

The young man finally comes to his senses, remembering his father. In humility, he recognizes his foolishness, decides to return to his father and ask for forgiveness and mercy. The father who had been watching and waiting, receives his son back with open arms of compassion. He is overjoyed by the return of his lost son! Immediately the father turns to his servants and asks them to prepare a giant feast in celebration.

Meanwhile, the older son is not one bit happy when he comes in from working the fields and discovers a party going on to celebrate his younger brother’s return. The father tries to dissuade the older brother from his jealous rage explaining, “You are always with me, and everything I have is yours.”